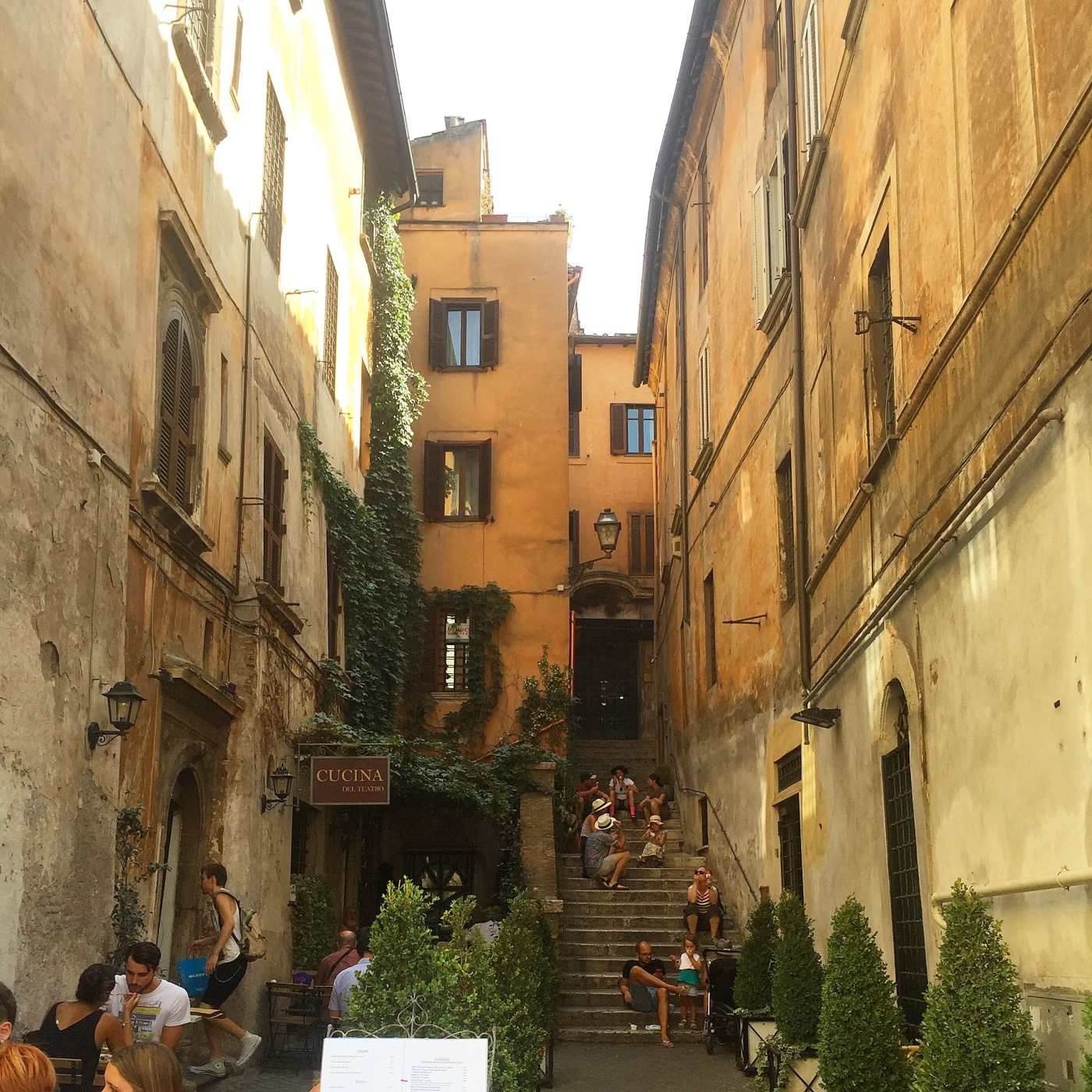 If you follow me on Instagram you may already know that I recently took a week long trip to Rome – which also happened to be my honeymoon! I still find it incredible that I can just hop on a plane and in less than 3 hours I can be in Italy, what a dream. Coming from the west coast of Canada where you have to fly at least 6 hours to get anywhere remotely foreign feeling, this is especially mind blowing. 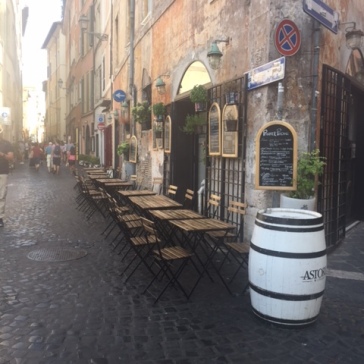 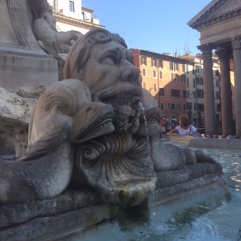 Since we were on our honeymoon, we treated ourselves and stayed at The Gran Meliá, which is basically a resort in the middle of Rome. It was incredibly beautiful, comfortable, and expensive. Though the 18 Euro piña coladas they served poolside were vegan so…worth it. It was also in a great location, slightly out of the city centre, about 5 minutes walk from Vatican City and the riverside. I was super excited to see what vegan food was like in Rome because I am a big big fan of pasta. It did not disappoint. 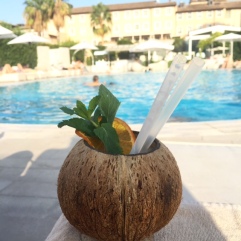 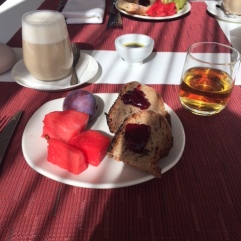 all the green olives please

Alright alright, I’m going to get straight into the vegan spots we tried and my recommendations as well as a few tips at the end.

This is the place to go if you are in Rome to get romantic or celebrate something special. I say this because it is quite expensive and you need to plan ahead and make a reservation but it is so worth it. Seating is on a rooftop patio where you are on level with gorgeous basilicas and can see the old city all lit up. The service is incredible, and though there are not many vegan options, all we tried were beautifully presented and flavourful. The wine was good too. It is also located in some little alleyway that has many other bars and restaurants to wander around and have pre or post dinner drinks. This was my absolute favourite night we had in Rome. 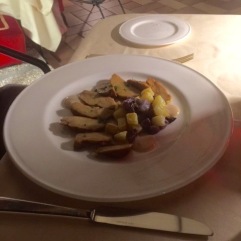 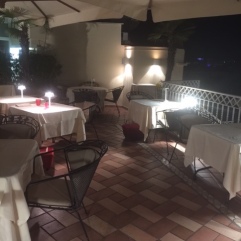 This was the raw cafe that was right near our hotel. It was a cute little spot and we were happy to see the word ‘vegano’ in the window when we walked by. They had a range of fresh juices and a large menu including burgers, sandwiches, and more. The juices were delicious and the nut cheeses were alright. I am not a good judge with raw food because I never eat it, besides fruit and veg of course. I had a olive and hummus sandwich, and my husband had a burger. I couldn’t really get beyond the taste of the raw ‘bread’ so I can’t really recommend this place unless you are into raw stuff. 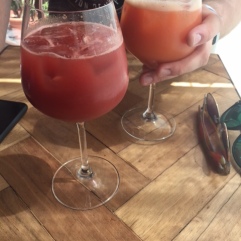 This was our first meal in Rome and it may have been the best. The decor was cute and very Italian, with some outdoor seating, which would have been lovely as it was 35 degrees but it was also quite busy when we arrived at 10pm so we took what we could get and were seated within 10 minutes. The food is not all vegan but there is a page in the menu with vegan options for all the courses. We started with a bruschetta trio and some deep-fried cheese balls with marinara sauce, which I am still dreaming about. Then for my main I had tofu and spinach filled ravioli and my husband had carbonara which he insists was even better than Fed By Water’s. We were way too full for desert but they did have some vegan gelato available. If I was going back to Rome for a weekend, this would be top of my list to go back to.

This was a little shop and cafe that we stumbled upon one afternoon when we were out for a long walk and were feeling very thirsty and a bit snacky. It had some yummy vegan savoury pastries and LOTS of Italian vegan cookies (we bought most of them.) Worth a pop in if you are in the area and want to pick up some snacks. 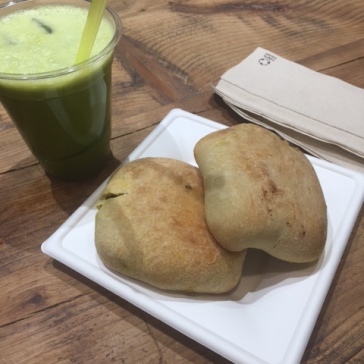 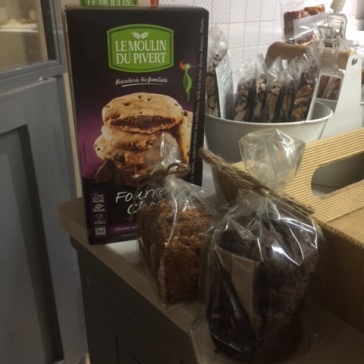 We almost didn’t find this little shop as its on a quiet side street and is pretty small from the outside, but I am so glad we did. They make all sorts of vegan cheeses in the lab downstairs – which we were kindly taken on a tour of. They use the upstairs as a shop front and also have a few tables and serve some delicious cheesey food! Some highlights for me were the ricotta and fig toast, as well as the stuffed focaccia. They also served some delicious wine that came from an organic vineyard of someone who works there. We bought so much cheese for breakfasts at the hotel as well as some to bring back to London to share. We had such a great time eating tasty food and meeting the lovely owners, would most definitely recommend. Also I will be keeping an eye out for them at markets in London as there was a casual mention that it could be a possibility in the future.

Another little veggie cafe we stumbled on in a time of refuelling need. This one is right by the Vatican, which was perfect to stop at after a long morning of touristing. We both had the vegan platter which included a quinoa salad, a chickpea quiche and a generous portion of hummus. They also had a vegan sandwich and maybe a few other bits. Was really flavourful and healthy, which was needed by this point. 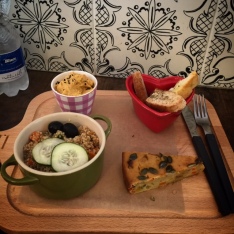 This restaurant was super cute and and had lovely servers. It had a large variety of foods, including traditional Italian foods as well as thai curry and things along those lines. We had some really delicious onion rings with some of the best tzatziki sauce I’ve had and a tart made with some fresh vegetables. We both had pizzas for our mains. Now if you are looking for a traditional Italian pizza this is not the place to get it. My pizza came with spinach, walnuts and a cashew drizzle and had a hemp base. Next time I went I would opt for a non pizza option as the starters were great and I’m sure the other dishes would be as well. I was just hoping for a boring old pizza and was slightly disappointed.

The decor at this restaurant was a bit strange in a good way. They had British posters all over the wall and it was fun trying to piece together what they were going for. The food was all pretty delicious, especially the DEEP FRIED SPAGHETTI… yup… and also the tiramisu was incredible. It had a nice casual vibe and felt more like a place where locals would go. 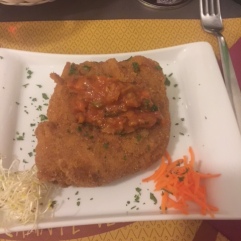 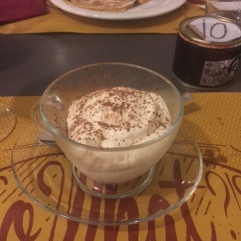 This was our go to gelato shop. It was close to our hotel and in some super cute lanes. They also had about 10 vegan flavours (all the ones with blue spoons.) I tried a bunch of flavours but in the end my favourite had to be the strawberry in a vegan cone. My husband settled on a mix of chocolate and raspberry as his favourite. 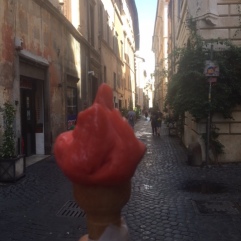 We really wanted to try this vegetarian but mostly vegan restaurant as it had great reviews and was also recommended to us by real live Romans, but they were closed the whole week we were there. I guess thats the risk when you travel at the time of year that Italians go on holiday. Next time for sure.

If you have a look on happycow.com there are tons more veggie and vegan spots in Rome that there was no way we could try them all. Another great thing about Rome and Italy in general I guess, is that there are vegan options in almost all normal restaurants. I love me a spaghetti pomodoro so I did have that a few times as well as asking for veggie pizzas without cheese. Of course it’s always good to check if it comes with parmesan or eggs in pastas ect. My last tip is to call restaurants before going, especially if you are travelling to get there specifically, as we had some problems with this. Sometimes restaurants would be closed on a random Thursday when it says they are open through the week on happy cow. If calling is tough, or your Italian is rubbish like me, checking the restaurants Facebook or Instagram could be another option. 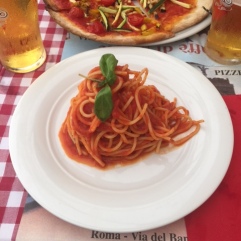 Overall we had an incredible holiday in Rome and were most definitely not lacking in finding vegan food. It is such a beautiful city full of history from so far back I can hardly wrap my brain around it. I can’t wait to explore more of Italy.

Any spots in Rome you love that I missed or tried any of these spots? Let me know in the comments! x

9 thoughts on “Vegan in Rome”